Buppy has been gaining traction with his versatility and creative vision. After dropping everything to take a chance in LA, the rising star placed importance on the business end of music and has more than become a mogul in the making. Valuing quality over quantity, Buppy closed out 2020 with his album Bedroom Tapes, Vol. 1, but lit a fire at the start of the New Year with the release of his track “Violence.” Hypnotizing guitar strums, light drums, and Buppy’s vocals float over the track to create a vibe of toxic love. In creating “Violence,” a relatable hit held together by a catchy melody, Buppy is solidifying his sound while highlighting his versatility and respect for other genres. The dark and smoky visual Buppy released shortly after the track has already racked up over 38K views on YouTube. I had the opportunity of sitting down with Buppy and we got into it all… From clubhouse and running ads to everything about his newest single titled “Violence.” 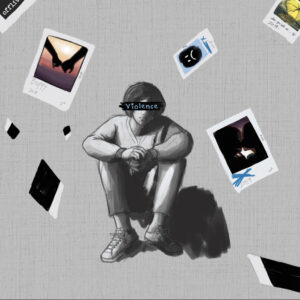 You mention in on of your captions it took like 6 months to make it so,How do you feel now that “Violence” is finally out?

That song was literally written six months ago, its been a while coming. It feels really good to have it out because there was a lot of people who worked on it you know it went from my bedroom, just me writing it as one of my little songs…and then when I moved to LA it was like alright got me in a room with my sister’s producer and we thought the entire production we striped it. We said alright here are the vocals, let’s do the entire production over. Like all of it right, and then from there we really made, basically we did it in three days. So it went from sitting with nothing on it for like four months, to being made completely in three days. It was because I had this pitching session with this A&R that really went no where that weekend and I wanted to pitch that song in its finished version so like me and my producer worked tirelessly, his name is Boilla, he’s amazing. And we finished that song and I love it and you know from there I was already like “Wow I just collaborated for the first time, that’s crazy.” And then I got my videographer on it and we just like leveled up. We drove 800 miles for the video and went to Northern California, we went to Monterey. This girl Lucy offered up her huge house and her parents let us film in their coffee shop. We set up this huge set like you won’t be able to recognize that it’s a house or like a coffee shop it. It should’ve cost me a lot of money. The video is amazing and like one of the things I’m most proud of. And that was a collaboration with you know multiple people in Monterey. People just came out to help like I had this kid named Zion shooting photos, that we pretty much met for the first time in like years there. And then one kid I hadn’t met before helping me out and then the girl… I hadn’t talked to her in ages but it was just a lot of like “Wow, people actually give a shit” in random places.

A lot of emotion went into this track and you were sharing a lot of people’s favorite lines which was dope and I was reading your meaning behind it. So what was your real message and direction with such a deep track?

It like very written about someone. And it’s so written about someone that even sometimes  it’s like hard to relate to in some parts because you’re like “I felt that last part but like what is he saying here.” This is bipolar as shit like this makes no sense right. But that’s like how the relationship it was written about was very bipolar. And it was my last relationship and it lasted three years. You know like all my teenage years, like all the teenage time people usually just go and fuck around and like meet a bunch of people… but like I was with one person and like I went from really caring about this person to falling into this toxicity where like I was just dependent, like really just dependent on her and us and I didn’t really have anything else. And it’s scary to me that some many people like live in their partners like… like if their partner dropped them then they’re fucked. And it was like I was that way and I’m scared of it now. Like I have become content alone and like that makes that song like… I got an audio recording, after I posted all those things on my story from the girl. I had blocked this girl but she made a separate account and sent me an audio recording in a DM. And it was just closure like honestly it was closure and really nice to hear and we’re both doing better. It was really just about this toxic relationship I had that lasted three years and there was a lot of mental and emotional manipulation, a lot of fights. Not ever me, but just like a lot of physicality on her behalf that I didn’t appreciate, and it’s just written all about that. She also came out to LA with me when I moved there so I re-wrote a little bit of the song when I went out there

So you were with her when I interviewed you the first time?

What “Alexis Texas?” Yeah so we were on and off. Like we were for a while then we weren’t. And I can’t say to much like I don’t want to bring to much on her but that what that’s written about. And it’s very personal to me, like literally anyone could say that like that song’s shit and like I would not care because that shit is closure, it was closure.

So for the visual, did you come up with the concept?

No, so like I came up with a few scenes. I just I really like supporting the guy I work with his name is Anthony Palmer. Her directs all my videos he directed “Alexis Texas,” he directed “Violence.” We shot “Open My Letter” while I was out there which is another song we’re working on, we’re shooting “Tell Me You’re Sorry” in a few weeks. Like I have a video for every song. Every single song is a video and this guy is like the only guy I work with. He directs all of it and shoots and edits all of it but I direct like a few scenes. So he’ll come in with like an actual treatment and basically we’ll take that treatment and just start shooting on the treatment right and if I see like, for instance at this last shoot there was this mansion we were recording in and it had these six windows, and we did this shot in “Alexis Texas” where we had a bunch of me’s in this ranch and it was like me performing to a bunch a me’s, that was my idea at the last one. So my idea with this one was these six windows and I would just pop up in each window, I don’t know if you’ve heard “Violence,” but when it goes “Hello, Hello,” I’m just popping up in each different window and it’s like a bunch of me’s. That like one of the scenes I directed but no I don’t really come up with all the ideas for those videos. I really like collaboration.

I want to speak to the teasers real quick, and this should definitely be in the article somewhere but like I make and edit all of my teasers on my Instagram, like all of them. Except for the older ones but like yeah.

You use your phone?

I do it on my laptop. I used to use iMovie then I changed to Final Cut. I have no idea how to edit but they look good.

What was your biggest challenge with this project?

I dropped it on New Year’s Eve. And as much as I like thought that it was a good idea, it wasn’t. And I was really, you know I’m not drinking age so I’m not going to out myself on anything I was sober as can be, but I was just not, you know I wasn’t there no one else was there for that night. I was trying to get people to post it on their story and like realistically I couldn’t even post it on my story. So like I tried and I ended up doing it but no one was really showing love that first night so that was rough. But I guess the other hardest part would be just like… you know it’s hard when you’re very emotionally attached to a record because like you never know how a song is going to do and I want this song to do great. I love this song like it’s my favorite song. Guess what everyone listens to rap, everyone likes random rappers and they don’t want to listen to me sing about some girl for like three minutes. So no matter what it’s going to get worse then a lot of my other songs and that blows but it’s like the people who do like it, what I’m realizing is that’s where I’m transitioning. Like I’m not going to make rap much now and like I don’t really do that so I’m kind of transitioning into that alternative R&B scene and I’m really proud of the record so I think that’s why I’m happy without, like I know it will get up there and do well.