If you haven’t heard of Johnny Lugautti, he is the one missing from all of your playlists. The emerging rockstar recently teamed up with Los Angeles rapper Chris King for a new banger. Now, he’s poppin’ sh&t for an unforgettable hit titled “Mr. Pop Yo Shit”. 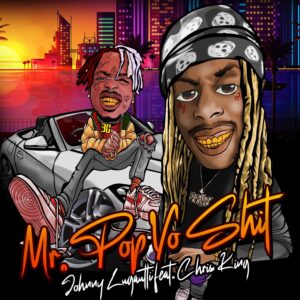 Following his EP “Born Star“… the track stands as just the beginning for a swift takeover by the rockstar. Johnny tapped Snotty Nose Mafia artist Chris King to inject boastful bars into the track. Produced by European producer group Anywaywell… Both undoubtable rockstars, created a hit to bring a new level of excitement to fans. For the mini-movie they took over a mansion in The Bay where they stunted bottles, chains, and cars to give viewers a glimpse of their wild lifestyles.

Born and raised in Greensboro, North Carolina, Johnny Lugautti is the embodiment of a true rockstar. His recent collaborations have included Euro Gotit, Snap Dogg, JD Daigotti, and several others. His infectious, sometimes emotionally charged music reflects hard times but gives light to a bright future. He is quickly becoming a fan favorite, captivating everyone’s attention as soon as he walks through the door. With nothing but success in his path, fans can expect more insane music and even bigger features from Johnny.