Hypnotizing harmonies and smooth vocals have left C’haii Summers’s fans craving more of his soulful bops. Born in Mobile, Alabama, he’s from a place that’s also birthed creatives such as Flo Milli and No Cap. Living his life between Atlanta, LA, and Alabama has given him a style that is uniquely his own. C’haii Summers is more than just a singer; he is an all-around artist. With a voice and flow reminiscent of Eric Bellinger, accompanied by a dope style cultivated by pieces made himself, he is a creator in all areas.

When did you start writing music?

So I started making music… I want to say 2015. That’s when I really dove in and really start taking music seriously, so around the time I graduated high school. Everybody, all of my siblings, my mom, and my dad, are musicians so…It was fun growing up in a house full of musicians, because I always wanted to compete… It was like a big competition. I always wanted to be the best.

Who are some of the artists that inspire you?

Where does your sense of style come from and what are some of your favorite things to wear?

I’m into… I like vintage. I like recreating vintage, vintage things that I find. I’m not really… I’m into the high fashion designer and I have a few pieces, but I’m not big on brands. I’m much bigger on just finding something and transforming it into something that no one else has. It’s weird. It really started from me literally not having clothes and me wanting to… I was always going somewhere and I never wanted to wear the same thing. And so, the clothes that I had, I just started cutting shit up. I was like, “We’re about to make something happen.” That’s where my style came from. 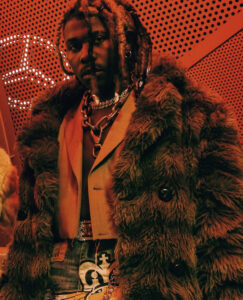 “I used to watch high fashion runways all the time, and it kind of gave me the swag with it.”

As a growing artist what are some of the upcoming plans you have for your brand?

Well, I’m getting ready to drop a project soon. I don’t want to drop any dates on it yet, but I’m getting ready to drop a project. And I think I want to… My biggest thing for my brand is I just want to inspire the youth to be out of the box and don’t be afraid to be an alternative. I was just talking about, with my friends, the other day, how we have to be more accepting of alternative Black male and female people, because it just has to happen. So I feel like that’s what my brand represents, just appreciation of alternative Black people.

Okay, so you’re getting ready to drop music. I know you don’t want to release a date, but what’s the vibe you’re going for and what are you about to show your listeners with the project?

I think I’m showing my listeners… Definitely, what I’ve been working on, the project that I’m working on, is just songs and stories from me growing up in my hometown, in Mobile, Alabama. I was back and forth between Mobile, Alabama and Los Angeles. When I grew up in Alabama, Alabama was way more lit than Los Angeles. I don’t care what nobody say. And it was… I just had a lot of… The vibe is I’m just… It’s just me coming into my own as a musician. It doesn’t sound like anything I’ve heard and I’m so confident in it, so I’m really excited for everybody to hear it, because I’ve been working really hard on it. I’ve been working really hard on it.

He paired up with Xay Astro to deliver a vibe with their track “Tranquility…” A smooth love track that is undeniably relatable. Check it out and keep up with C’haii for his new project!