Based in Massachusetts, rising artist Trace is winning the hearts of listeners with his purely indie vibes and down to earth personality. Always having a love for music, Trace is more than just an artist as he plays a wealth of instruments on top of possessing a raw and organic voice. With a growing discography Trace continues to turn out upbeat and catchy hits. From his tracks like “Everybody’s Gonna Die” and “No Chill” to his feature on the track titled ” Ooo That’s Nice,” Trace has shown no fear in not only making indie pop but showing an appreciation for rap as well. As his hype grows, he continues to hone his sound and expand his brand to match the energy he is generating. Upon the release of his new guitar flooded single titled “Poison,” I had the chance to sit down and talk everything Trace and his new hit. 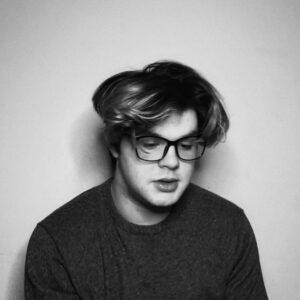 What got you into music?

Originally, my go-to answer is that I used it as a therapy, which I think it’s true for all writers or all artists, really but I think that I started writing because my parents divorced when I was around 10-ish, and it really sucked. And I grew up with a single mom, and so I remember writing a song in… Let me fix this before… There we go. I remember writing a song for my mom when I was a kid and her loving it, and so I just remember that feeling of how she felt when I did something like that. And I guess just when I was growing up, I always remembered that and kept just wanting it over and over again, so now I write.

When did you… Did you just start releasing music? When did you start putting it out?

I’ve been putting out music for about six years. And I used the past probably four and a half to five years to really develop my sound and really develop my craft and learn how to song-write and learn the music theory, and kind of grow up around my favorite artists and listening to the greats, like Kanye, Jay-Z, Nas, Pac, all of them. When it was time to jump, when Buppy called me, and he told me he had this idea for something he wanted to really do and said, like, “This is it. It’s go time.” I really could bring it, and I really could show him that, I know what I’m doing, and I really want it.

I went to college for commercial music production. As almost every artist’s story when it comes to college, I really went to college for my mom and just like… Because it’s like the thing to do. You graduate high school and then, okay, time to college, and what else? And I didn’t really realize that I had other options. While I was in college, I was talking with my music professor, and he found a workaround to hire me as a TA, so I worked for the school for about a year and a half until I dropped out. I recently dropped out, and now I’m doing this full-time.

I think especially when people go to school for music, they end up dropping out only because… And in a college, it’s really, really, really hard. It’s a lot harder than you thought to go through the process on your own.

Yeah, I think that if you pursue music in college, it’s more for the music theory and more for the classical or the classically trained musicians. And I’m classically trained in almost 15 different instruments, and I know how to play a lot of them by ear. I just grew up around a lot of different instruments. So, when it came time to go to the college classes, I already knew what they were teaching. I did this in my free time. My final project was an album for senior, when I was a senior. I’ve been doing this a long time, so I know all the stuff already, so that way I can just skip that and go straight to what I don’t know, like the music business part of it and stuff like that.

For sure. Do you have a favorite instrument?

My voice. And I really like producing. But I think that I’m classically trained the most in piano, and I’ve been playing piano for a little more than a decade.

That’s cool! Describe to how you would describe your style?

It’s interesting, because my manager told me that I would get this question and that I needed to be ready to know what my style is. But if I’m honest, I really don’t know yet. I’ve done everything, and I can do everything from just straight hip-hop music, straight R&B music. I can write a girl a love song, I can’t write a girl a break-up song. I don’t want to like toot my own horn, but I know, on that end of it, I really know what I’m doing. I’m basically anything that I’m feeling in the moment. I think that that’s my style. I think my style is… I think right now it’s like indie pop. And by indie I don’t mean the genre indie, I mean just really, really independent. I don’t want to be industry. I want to take what more of the mainstream artists are doing and challenge it and take what they’re doing, because I write songs like The Kid Laroi, and I have beats, all those like Juice WRLD and stuff like that. But I want to take that and push it further, if that makes sense.

Who are some of the people that inspire you then?

I grew up on Ye, so I know every word to 808s & Heartbreaks. That’s my favorite. That’s my favorite album of all time, is 808s & Heartbreaks. Yeah. I think Ye is an extremely underrated project. I love Ye. I really like Kanye. I think Jay-Z is the greatest rapper to ever do it. I love Jay-Z. And a huge influence in the pop side of it is Jon Bellion actually, which sounds kind of weird because I know he’s known for two songs, and they’re really, really mainstream pop, but he grew up, and he still is, as a songwriter. And he got signed… He signed a songwriting deal. And he’s written, just in the past year, Memories by Maroon 5, half of Katie Perry’s album, Selena Gomez, Justin Bieber, everyone. And it’s cool because all of the songs are massive, and everyone is like, “Oh, my gosh, what is it about these songs?” And it’s because Jon Bellion wrote them. He’s just so good at writing, and he produces them and everything. So, I think he’s one of my biggest influences and he’s just a pure genius. He’s just a genius.

Talk to me about Poison. What inspired that?

Poison, I wrote about an ex, that I was in a toxic relationship my first year of college. And we dated on and off for about nine or 10 months, and then we called it quits. I think I was chilling with my friends in college one night, and we were talking, and my friends… My college friends and I, we’re really close. They’re some of the most supportive people ever, and I love my friends to death. And we were talking about this girl, and my past with her. And one of them was like, “Dude, she’s really bad for you, she’s really your poison.” And I was like, “Dude, she is.” And then, yeah, I found the beat online. I just really love Pacific Beats, that’s the people who produced the beat. I recorded it, and I went to Buppy and I told him, “I want to release this on a big, big, big scale, bigger than I’ve ever done before,” that I want this to be the song that legitimized my brand. And he said, “All right.” And then he helped me through it. Him and his sister, Eleanor, really were some of the biggest people to do it.

When did you meet them?

Buppy is awesome. Buppy is my favorite. Yeah, he’s super dope. I met Buppy, it’s the weirdest story. I went to a church camp five or six years ago, and I met this girl there who… And this was when I first started doing music, on an old 2004 laptop with fruity loops, and I just messed around. I started with a Roland, it was… Yeah. And I told her I did music and she said, “Oh, I know this other guy who wants to get into music.” And she introduced me to this kid named Jake Crum, who’s doing well now, shout out to Jake Crum, he’s super dope. But I hit him up, and I was in his lives sometime, and he previewed a track with a girl named Eleanor Kingston. And so I followed her, and then she posted her brother’s music, and then we’ve just been showing love to each other. And then come beginning of 2020, he hits me up.

So, when is the video coming?

Friday. The video is coming. And the video is shot by Isaiah Kim, he’s a director, he’s shot a lot of stuff for Zedrin. I don’t know if you know Zedrin.

Yeah. And he’s insanely brilliant. He’s topnotch, he’s really good, and I think it surprised me how much he brought to life. I would say something, just on the fly, I’ll be like, “Oh, yeah, let’s do this.” And no expectation to actually do it, but he would work it in, and I’d be like, “Dude, that’s insane.” Yeah, he’s really amazing.

What do you want to be known for as an artist?

When I was going through this re-brand that I went through, I came up with this slogan that I really, really liked. The slogan is “From Memories, For Memories.” And I think that really kind of… Just to speak on that, and what I want to do, I think that that perfectly encapsulates what I want to do. I write songs from my memories, from what’s happened to me, from my life experiences, and I’ve started to write songs about other people’s life experiences. And I think I’ve always acted like life is a movie, and I want my songs to be the soundtrack. I think it’d be super dope because… I mean, Poison, you can even hear it in some of the other earlier stuff on SoundCloud, and just in general or whatever. I kind of wanted to be that guy, but I just didn’t know how, but now that I’ve spent so much time on it. Poison, that’s a big song. It’s really intense and it’s really jamming, and I think that that’s just what I want my music to be, just from memories, for memories.

Check out Trace’s video for his track “Poison!”