He’s more than a rapper, he’s a hood Rockstar! Luh T5 hails from West Palm Beach Florida, and is delivering head-banging trap hits to listeners across the state and beyond. Embodying every bit of slime energy, the rising artist is making all the right moves to hit the top. After beginning to view music as a career, Luh T5 has released a versatile discography filled with his mellow flow, and of course those heavy 808’s for your car speakers. From club hits to chill vibes, this Rockstar is mastering the ability to create energy altering hits for both his day one and new fans. He recently released a new project titled “Reincarnated,” which happens to be 11 songs of heavy vibes and a new extension of the official Hood Rockstar. 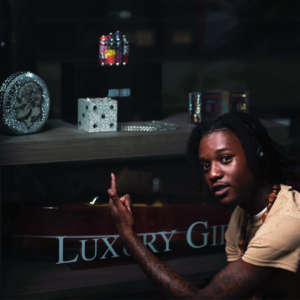 4 years ago, what changed for you that made you decide to pursue music as a career?

I know young thug is one of your inspirations talk to me about what about him inspired you and why his label interests you?

I feel you. Is that why they call you Rockstar?

Yeah. You feel me, I’m the Rockstar. I’m the Hood Rockstar.

You’ve been busy you were on a mixtape with a bunch of artists from Florida, the “Palm Beach Mixtape.” Talk to me about the tape and DJFourteen who put you on it.

It was like, Fourteen was trying to put everybody together because everybody’s not really together, so he tried to put everybody together to see what we could do as a whole. And like that he came to me, and he was like… He’s a close friend of mine so he just told me he felt like I should be on the tape. And I work hard so he was like, yeah he got me. Sent him a couple of the songs and he made it a day for me. He made it happen.

What are some of your goals for your music and what other avenues do you want to pursue?

You have a new video about to drop in a few days, talk to me about who shot it and the vibe that can be expected from the visual.

Shoutout to Nemo. He the one who shot it and… I don’t want to say which song it is because I want it to be a surprise. But it’s a song off of my mixtape though, song… And I just dropped my mixtape cover today, “Reincarnated.” That’s going to be a whole new side of me, a whole different side of me,  I just feel like I had to be reborn, I had to… Not restart, but I had to really understand how I’m going to go this way, how I’m going to do it this time. It was like that and also today Fireboy, what’s up Fireboy he part of the Thug crew, me and him because we dropping a tape today, I have to call him to see what time its going to be released. But that I got that mixtape, the visual coming up, and I got my mixtape coming up.

So being independent right now and being so business-minded, what are some of the challenges you’ve ran into?

Really, I wouldn’t say really challenges, I would just say everything that I get, that comes my way… Everything that comes my way, I just have to go with it, because that’s just part of it like nothing comes easy. Nothing comes easy. Nobody just blows up overnight. They are not going to feel it as working hard for it. I feel like…I like the challenges, I’m happy I get challenges. I’m happy they come. They don’t, it stop me, it just makes me go harder and it makes me into a better person.