Virginia bread artist Wayve is captivating listers with his harmonic flow. He stared off 2021 with the release of his single “Uno”, gifting listeners smooth vibes. The track served as a follow up to his debut album “Self Discovered” which released mid 2020. As he continuities to excel, the artist has caught the attentions of fans and influencers across the country. He is an artist and college student putting in the work to nurture his flourishing music career. While COVID put a wedge between shows he had lined up, he recently performed for DMV ReVamped, hosted by The Clout Cloud, Heir Wave Music Group, and Refresh Music Group. Wayve graced the virtual audience with his smooth flow and catchy lyrics. I had the opportunity of catching up with Wayve to talk about his career to this point, and what’s in store for the future! 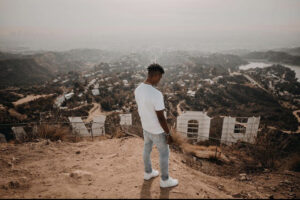 When did you first start writing music?

I first started writing music when I was probably 16 or 17. I started with my cousin. We would just record music in his like closet type, and do little stuff like that to start out. And then he kinda got me introduced to it when I was probably in 11th grade or 10th grade, with me and my other cousin.

Is that when you started taking it seriously?

No, I didn’t take it seriously until 2019, summer. I mean, I was dropping stuff on SoundCloud, just for… You know? But I feel like 2019 summer was when I first started doing music videos and stuff.

What changed that made you decide to really go hard for it?

I feel like for real, it’s ’cause I started getting… I started noticing the progress. I feel like when I first started out, it was… You know, my cousin was telling me from the very beginning that I was good. He saw that I was talented, but I feel like I wasn’t taking it serious, like I said at first. But 2019, I did, I started doing the videos and… I started doing videos, started really paying for studio time and that was like, “Alright,” you know?

Talk to me about your style a little bit and how did you become Wayve?

Well, I got the name because my name, Wayne… And I was with some friends and we were just thinking like, “What could your artist name be?” And then she was like, “Well, your flow kinda like melodic. You kinda got some wave-y type vibes to you.” So she was like, “Maybe you should just call yourself Wave.” But I feel like me as an artist, I feel like I make real melodic music, like singing type, but rap at the same time.

Who are some of your inspirations?

Drake. Drake is like a big inspiration for me, just because he touch every genre of music. I feel like I want to get to a point in my career to where I could make like a Latin song, or make an alternative type song, because I feel like I appreciate all type of music, for real.

What are some of the other types of music that you’re into?

To be honest, I like everything, but I listen to classical music, piano music. I do listen to pop, anything that sounds good to me, for the most part, I like. But yeah, I grew up playing the violin and stuff, so I’ll say the biggest thing that’s outside of regular hip-hop, rap, would be classical music, like listening to piano, Bach, Beethoven type. I mean, I don’t do it that often, but if I wanna chill, calm down, I feel like I get in my zone with that.

Talk to me about the two of your tracks that ended up getting picked up by the YouTuber, Tommy Craze? That was right when you started releasing too!

Yeah, that was like, when I started releasing. He actually worked with us, or picked up one of my homies named Troy the Rapper, he picked up him and his brother’s video. He was like, “Dang,” and he kind of… He followed Troy and we got kind of in tune with him, and then I dropped a song called Luxury two months after… No, first we made a song called Die a Legend, I made that with Troy, that was not… That was last January. And then he posted that on his page and then he got familiar with me, so when I dropped Luxury, he ended up posting that, and then Switch Lanes too.

How did you end up getting linked up with Ilias? And what is your relationship like, with him as your manager?

I really don’t even know how I met Ilias, to be honest. But actually, I think I just got familiar with The Clout Cloud and then I met him and I met Joe, we have been cool for a few years, and then as a recent, he just was like, “Bro, let’s really like lock in, I can manage you,” type. I mean, I’ve never had a manager before this. I’m used to being self-managed, very independent. But yeah, I got tuned in with Ilias, he… Shout-out to Ilias, ’cause he real tuned in… A lot of stuff… He did do a lot of stuff behind the scenes. So, I felt like that would be really beneficial for me, but linking up with him… Because he’s so in tune with everybody, he’s so business-minded, and I feel like that was good for me because managing myself, I know how I wanna be managed, and I know what I expect out of a manager. I feel like linking up with him was definitely a good move.

Talk to me about the VA story. That just dropped right? With Pedro and another artist.

Yeah, Pedro and Why Not Deuce. Yeah, shout out to both of them. I’m glad I got on the song with both of them. It was long overdue with me and Pedro, but I met Deuce probably two, three months before we made that song and I was like, “Oh, this dude fire.” I was trying to link up with him. And then when Joe and Pedro had sent me the track, they was like, “Bro, I want you on this.” They sent it to me, I did my part, then I was like, “Yo, we gonna put Deuce on this too.” So when that happened, I’m like, “Alright, yeah, this definitely ’bout to be a hit,” ’cause when he first sent me the song, I was like, “Dang, this definitely like a vibe, I wanna do my thing on it.”

How has it been for you as an artist, especially just kinda getting into it and releasing music during the pandemic?

I feel like that the pandemic kinda screwed up a lot of stuff because performing is a big type thing to gain exposure, obviously, and gain fans and stuff and… I was in school, I go to UVA and February, January, last year, I was doing a lot of performances for the events we had here at school. And I had three more like that coming March. We had went home for spring break, and I was supposed to come back and do… I had three things lined up to do. I don’t know what I could have done over summer or later last year, but I definitely feel like it affected it, but I was dropping… I was still dropping music, dropped the EP, I dropped my album, and I feel like both of those have been doing well.

So how do you manage too, balancing the music and the schoolwork?

It takes up a lot of time ’cause both of them full-time things. I’m a full-time student, but I’m also trying to be a full-time artist at the same time. So times that I do get free time, I try to record, but then sometimes I’m like, “Dang, I’m taking away from my studying, I need to be studying, I need to be doing work.” So it’s definitely hard trying to manage both of them, but I’ve been managing to get by, so might get by, do well in both, I feel like.

What are you working on right now, music-wise?

I dropped an album in October, so these last three months I’ve just been hammering videos, doing photo shoots, trying to create outside of just making music. I wanna push my album a little bit more, so I’ve been just… Like I said, I’ve just been making videos, just trying to create good quality content to put out in front of people to build my image. But I still record, I still have unreleased stuff. I’m just not dropping as much right now because I’m trying to build my image and push the music that I did before because it’s a whole lot of saturation as far as the music industry. So I wanna be able to make sure that the stuff that I’ve released already it’s gonna get heard before I give out more of myself type.

What do you feel like you as an artist offers the industry that’s different than what’s out there right now?

I feel like I have a genuine appreciation for music. Like I said before, I grew up playing the violin, I started in sixth grade, I finished when I was… I stopped playing my senior year and I feel like that created my melodic sound, singing, and then I also wrote poetry, so I combined both of those to create my sound. But as far as the saturation part, I just feel like it’s a whole lot of people that’s just doing music for… To say they doing music or influencers who got a platform, and they’re like, “Oh, I can make music off of this,” but they don’t… Never appreciated music, they just dropping it to make money off of it. And I feel like I’ve been doing… Consistently making music for years now, and I get paid for my music, but it’s not… You know what I’m saying?