Atlanta based artist 985 Goldie carries a southern swag and melodic flow that’s a testament to his roots and hustling ways. Originally from Louisiana, he moved to Atlanta at a young age and it has since become the stomping ground for his growing music career. Mr. “If I Said It, I Meant It,” holds nothing back in his lyrics, and while he delivers raw rap over heavy 808’s… don’t let him fool you he can harmonize too. I had the opportunity of catching up with him to talk all things Goldie, new music, and his love for Summer Walker. 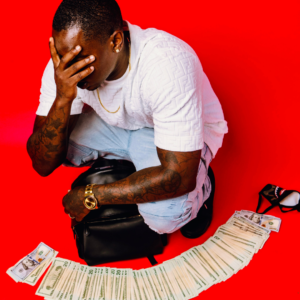 It’s funny, I actually started really thinking that I could rap in the shower, so I started free styling in the shower… I’m serious. So I used to free style in the shower. I feel like I was talking about something, so I started freestyling at school, you know what I’m saying?  Everybody started being like, “Oh… ” You know what I’m saying, so… I got a mic, maybe my 16th birthday, I got a mic and I started flowing and doing it myself. Not really knowing what I was doing, but I could make it sound good, so I could put it out.

Your from Louisiana right? Talk to me about growing up there and how did you end up in Atlanta?

Well, Hurricane Katrina came, so it really wasn’t… It really wasn’t something I did out there. I was young when it actually started 2005, so that’s like 15 years ago, so… But Louisiana is more of where my family is, so… When I think about it, it’s really just family out there.

You were young when you came to Atlanta but how have you been escalating your music career, since being here?

Okay so talk to me about Koo Koo first. You resend a video on your IG so how was the video shoot and when’s it coming out?

It’s called Koo Koo you should have expected it to go crazy.

You rap but I heard some harmonies in the music you sent me so Who are some of the artists you’re inspired by and if you have someone who would be a dream to work with who would that be?

When did you become involved with Goddess Entertainment and BlackiNation and what role do they play in your current career?

Well, I actually been with them for a while. I’ve been with them for five years. They actually pushed me, they pushed me… They give me… I’ve learned a lot from Monk, patient Monk, big shoutout to him. I learned a lot from him musically, because I used to only… I used to be like a freestyle rapper, you know what I’m saying, I got a bunch of bars for you. He helped me put my songs together in actual songs, you know what I’m saying.

What are some of the goals you have for your brand?

Music is just whatever comes to me. The songs that you’ve heard, I probably made the songs in maybe an hour or like 45 minutes. So, and that’s the real thing. That’s a really real thing. It’s just however it happens; however, it comes, I think about a EP, but I have so much music, I maybe have 15 songs that I recorded in the last maybe three months. I really like all levels, so that’s kind of hard but it’s different vibes. It’s like, I don’t want to put, you heard me, this song while I’m singing, and then this song while I’m talking about, you heard me with your baby momma on this.

I know you don’t have a tape out yet. But what do you want everyone to know about Goldie when you do drop a tape?

So how did you get the name Goldie? When did you come up with that?

My daddy name… My dad is infamous in Louisiana and his name is Goldie, and I got his first name so it kind of just made sense. You know what I’m saying?

Goldie’s track “Perfext n’ Shit” is on all streaming platforms and definitely worth the add to your playlist. He has been busy creating new music and content to release to his fans very soon!