When you think of New York, a few names may spring to mind: Diddy, Jay-Z and, for sure, the rap legend Notorious B.I.G. But the newest name you should know is that of drill’s latest spokesman, Fivio Foreign. With lucrative club tracks such as ‘Big Drip’ and his newest release ‘Wetty’ storming the rap world, Brooklyn’s own has been on everybody’s lips. When NME gives the rapper a call, he explains that he’s trying to go “viral” because, he says, “at the end of the day, if it ain’t viral, it ain’t about nothing.”

the idea of mixing luxury and mass-market fashion is very modern, no one wears head to toe designer anymore

With a rising pandemic on our hands, the best thing we can do is sit at home and occupy our time. And like countless people around the world, Fivio Foreign is turning to his PS4 to do just that. Proclaiming that he’s “gucci” (or ‘great’ if you’re not hip) in his house just outside of New York City, he seemed unfazed by the recent New York lockdown, because he can “stay in the house for mad long”.

But when you’re trapped inside, it gives you enough time to think about all your other adventures. When asked about his childhood in Flatbush, Brooklyn, Fivio turns to positive memories of hanging out with his buddies: “We always had water fights and played man-hunt, which is like extreme tag. I wouldn’t say I was the best kid but I always had a good heart. The way we was raised, we can’t fear no man.” 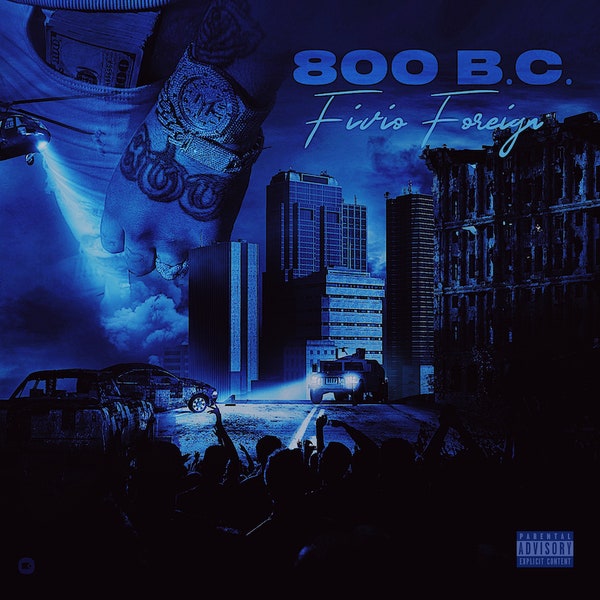 New EP ‘800 BC’ sees Fivio revive Chicago’s original erratic drill sound on ‘Awesome’ and sing his heart out on ‘Issa Vibe’. Lead single ‘Wetty’ is all about his ride-or-die love for someone; he regularly finds love in unexpected places (“I met lil’ mama in a deli”). The rapper recently told Genius that he falls in love quickly – which, as it happens, is a strong trait for an Aries like Fivio. He tells NME that he’s into star signs: “I believe in astrology. I really go off of energy. It don’t matter if you’re female or male, if you’ve treated me good and like the best friend in the world, I’ll fuck with that.”

Fivio also has “mad love” for his friends, such as fellow New Yorker Lil Tjay, who introduced him to his current label, Columbia Records. And one name Fivio could never forget is that of Pop Smoke, the fellow Brooklyn rapper who was tragically shot dead in February: “I learned everything [from him]. I learnt how to deal with this shit and not to get hyped over the now. Once you find yourself hyped or comfortable with the shit that is happening, you won’t really go further. It’s the bigger things you got to work on.”

The two Brooklynites took the latter half of 2019 by storm as they pioneered the emerging Brooklyn drill movement. Smoke was the more prevalent figure of the two, and now he’s gone. Is it daunting for Fivio to take on the torch from the budding star? After playing around with the word ‘daunting’ in a passable British accent, he tells NME that he’s not trying to succeed Smoke.

“I’m a do my best regardless,” he says. “Whatever happens, happens because I’m trying to dot every ‘I’ and cross every ‘T’. I’m the go-to person to keep this shit alive before this shit dies out. I gotta keep it alive for the others that want to go viral as well.”

Due to its often violent lyrical content, UK drill has been badly stigmatised by the right-wing press and censored by police. Drill stars are blamed for a rise in violence in the capital: Skengdo X AM have received suspended sentences for performing AM’s track ‘Attempted’ and West London’s CGM (formerly known as 1011) must submit their lyrics to the police to review before releasing any music. Countless drill music videos have been removed from YouTube and concerts cancelled due to police pressure.

Does drill face similar challenges in the US?  “That don’t really happen here,” Fivio explains. Still, feeling compelled to defend his sometimes violent lyrics, he’s insists that they aren’t as harmful as some claim: “We just entertain you. Who said what we did was true? It’s like being an actor in a movie and I’m shooting n****s. Does that mean I’m shooting them in real life?

“I think people [listen to drill] for the same reason why people watch movies. They want to live that life without having to go through it. It scratches that itch because some people may want to go out and shoot someone, play a drill song and then that feeling passes. They think about something else.”

And since his music is more vibey and filled with braggadocio than that of his UK counterparts, Fivio proves that there is a lighter side to the victimised genre. With ‘800 B.C’ Fivio is taking drill back to the good old days; his music is full of fun and cockiness. So what’s next for the ascendant star?

“I want to sign some artists and retire from rap [after one album],” he says, surprisingly. “All the real greats wanted out, or they had to die (R.I.P Aaliyah). But Biggie had one album and he is a legend. I feel like if you do one album, you don’t give people the chance to judge you twice. If they judge you once and that legacy goes on, you’ll go viral.”