Hailing from Bankhead Atlanta, GeGe the real one is building a loyal fan base with her hard-hitting lyrics and boss vibe! Coming from a place carrying legends like the Ying Yang Twins and T.I., GeGe uses her life of music and dance to turn everything she touches into gold, building a legacy of her own. She has been busy working amongst some amazing industry creatives to include Street Execs producer King Cee O. GeGe TheReal1 might find rapping fun but she does not come to play! As one of the realest coming up in the game she has built a following of over 26K on Instagram and a fan base eager for more real rap from GeGe. Her track “2Real,” released in August, definitely let her fans know just how much of a boss she is… So I had to catch up with her to talk about her music and upcoming projects! 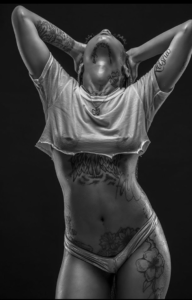 When did you start writing music & how have you evolved since recording your first song?

I really think it’s really just in me, because I love to dance, too. I just love music overall.

Who are some of the artists yours inspired by & who would you like to collaborate with in the future?

I really love Future, Drake. I really love Drake, too. But Erykah Badu is really by far, most her, and Patti LaBelle. I used to listen to them when I was young. So it’s like, I know how to mix it up too.

You’re getting ready to drop your official website, what are some of the other things you are working on for your brand?

Okay, so as far as writing right now, I have actually finished my second EP. It’s called “Viagra” and it’s going to be dropped like January. So right now, we just working on videos and my merch. Like you said on the website, my merch dropped on the website and all that type of stuff. We have just little minor setbacks, like the little prices and stuff is in a different language so I’m trying to wait till they fix that. But other than that, everything is going well, I dropped my first video and we’re working on another video. I got a lot of stuff lined up. I have been working with a lot of artists as well. I’m really trying to boost my credibility with music, so I won’t… I don’t really want to sound the same.

As a female coming up in the industry, what are some of the challenges you’ve face and how have you overcome them?

Yeah. When I first did my song, my music was being uploaded and stuff to other websites, and people was getting paid off my music and I didn’t even know. I had to get copyrights and trademarks, and everything.

What is your relationship like with your management, & how did you become involved with her and Blackination?

I love them. They’re like family to me, really. It’s like it’s really no different from family. Everybody has problems sometimes, but as long as you can come back as one, then it was not… It wasn’t a problem. So, I don’t really have a problem with them. They’re real cool, cool people and they get the job done. That’s all that matters.

They call you GeGe the real one so what qualities qualify someone as real to you ?

If you can’t be yourself, you’re not real. And I’m not just saying like just being yourself without make-up and all that stuff. That’s not, not being yourself, like just not being yourself at all. Trying to satisfy others and stuff like that. Doing disloyalty things towards people, that’s not real. I try my best not to surround myself around people with those type of intentions and energy, because it kind of rubs off on you. 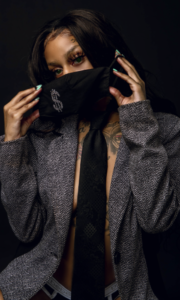 After beginning to take music seriously, GeGe was heard by Goddess Entertainment Management, which lead to not only a management deal but a record deal with indie label BlackiRecords. After recently celebrating her birthday, GeGe is ready to go into her next year of life grinding harder than ever! Stay on the lookout for all of GeGe TheReal1’s upcoming videos and project, but in the mean time vibe out to her track “2Real.”