Virginia emcee Ro$$etti has developed a strong pen game with bars filled with metaphors and heavy punchlines. The rising artist picked up a pen before anything, beginning with writing poetry. Attending a performing arts high school helped to nurture the talent that resides within Ro$$etti. After a short time playing college football, he then began taking music seriously and putting his words to music his sophomore year of college. As a battle rapper, Ro$$etti has secured a solid spot with RVA Rap Elite, where he uses the competition he loved from the game of football to lyrically spar with some of the most talented emcees in his area. Ro$$etti has been busy working hard and upon the release of his newest 14 track grail of lyricism and and raw emotion titled “What Would Percy Miller Do” (WWPMD), I had the opportunity of catching up with him to talk about his journey and the new tape!

Who are some of the artists who inspire you?

Jay-Z is my favorite rapper, 100% just… I don’t know, it’s the way that he’s able to incorporate wordplay into the music, but it not feeling overboard or overwhelming or nothing like that, I feel like that’s an important skill to have, so definitely HOV. I love Rick Ross, love Kanye, honestly anybody who got some soul today stuff, I’m going to rock with them because to my core, that’s what I like. You know what I mean? My parents, they always were playing soul music in the house, whether that be the Marvin Gaye, Patti, or whoever it was, so that’s why my music, a lot of it, is very sampling and soul-based because of that. So I’d say those are the people musically who really influenced me. Like I said, because I went to that performing arts school, I was a writer, and I was really in tune with that side of things more so than the music earlier on, so I really was reading Langston Hughes pretty heavily at one point, not as much anymore as I should, but I was definitely into Langston Hughes at one point, like Sylvia Plath, I was reading a lot, so…it’s just one of those things where my writing style of music, a lot of that transfers from who I was as a poet prior to putting it on beats.

How did you get involved with Rap Elite, and how has battle rap evolved you as an artist?

No, not at all. For one, like I said, I was an athlete, so while I realized that wasn’t going to go to the next level, that competitiveness was still inside of me. I’m just a naturally competitive person. So one day I was on Instagram, just scrolling through and I just kind of came across the page, I saw they was doing the monthly cyphers and all of that, and at that point, in any room, I had been in, I was the best rapper clearly. So I’m like, “Alright, well, I’m just going to go here and win this shit or whatever,” and then I pulled up and saw it wasn’t that, I’m like, “Oh no, they rap rap,” so it definitely pushed my pen to get better, just seeing how there is another way to put it together, the way that I’m doing isn’t the only way to go about it. So granted when I pulled up, it was… People was doing their thing, I was definitely able to stand out because I don’t really like to say arrogance, but I’m not sure what the… I’m not sure what the right word is, so I’m just going to… I’m going to stick with that. Like it’s a certain arrogance about myself like when I’m rapping that naturally people are going to kind of pick a side at that point, you either like what I’m doing or you don’t, but regardless, you’re going to be tuned in.

So from my first cypher and everything, I did well, made it to the sudden death round, and then after that, it’s just they really embraced me. Any time I’m putting out a freestyle, dropping a video, they posting it up on their page, just always showing… Just always showing love, that’s how I found your platform through Rap Elite because I did that freestyle over the one “Brown Sugar” beat or whatever. So yeah, Rap Elite. I love Rap Elite, just the staff and just honestly just giving artists a platform to just come get your shit off for real because we didn’t have that before, so definitely shout out to them. And then as far as the battle rap goes, I actually have another battle set up for this Sunday, it’s like a private event or something like that, but I got another one coming up this Sunday, and again, that’s just the athlete in me just wanting to compete and you know really testing my pen and just go in there, man to man against another person and just be able to just talk my talk. 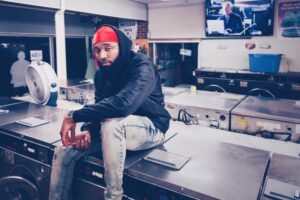 You were featured on Benny the Butcher’s mixtape, “Who Can Rap.” How did that feel and how did the opportunity come about to be featured on the tape?

That album, that was crazy. But the way that that worked, honestly, I guess… I reached out to him a few times, Any time I put freestyle on my page, just kind of forward it over to him and whoever else, just trying to get some eyes on my stuff, and then I was in my living room, it was me and my girl and the dogs, we were just in there shooting the shit, fucking around or whatever, and then my phone vibrated and I looked and in my inbox, it was Benny, and I’m, you know… I’m like a kid at this point, like you know what I mean, like what’s going on? Type shit, so from there, we just started chopping it up through the inbox and everything, and he told me he was putting this tape together and to send them a couple of joints and he picked one, threw it on there.

He actually has another project that he’s doing that I’m going to be featured on that one as well. So yeah, he’s been a real solid, just giving me feedback on my stuff more and more so than anything else, just… Even beyond the platform that he gave me and brought me a few fans and stuff like that, just having somebody like that to be able to just kind of school me and tell me some things that they think I could do to improve the things they think that I do strongly and all of that. So definitely salute to him, that’s been a big help for me for sure.

Talk to me about B-side bars.

My train of thought with that is just like in the past like month, as I’ve been leading up to my album I’m going to drop, I can recognize that I’ve sucked at social media for years. That’s just not something that I’ve been good at and that’s another thing I can thank Rap Elite for, honestly, just seeing other artists, different things that they do to try to just stay active and visible and stuff like that. Shout out again to them for that but I was just kind of brainstorming, thinking of different things that I could possibly do, just to keep myself visible whether I have something dropping or not. And the thing that I can always lean back on is rapping. Like in the past, if I just know, I’m like, “Hold on, I ain’t posted nothing in a month, I need to throw something out.” I can rap, so I’m just going to put the phone in my face and rap, put that out the type of deal, so I said, “That’s something easy that I can do.”

And then I thought about… Like I said in the post when people rap, they run to “Banned from TV” or they’ll do “Dead Presidents.” So it’s always the same beats people are picking, so I’m like, it’s hella songs out there that weren’t radio singles that are dope to me, and I love them. So one, I’m always down to share music with people, because I like when people share new music with me, so I’m like, this will be an opportunity for me to just share music that I love that people might not be aware of just showcase some of my abilities and it’ll just give me something to post just because, again, I’m not a social media dude like that. People definitely seem receptive to it and I’m excited to see where it goes. I want to keep on trying to raise the production value as time goes, like shoot actual videos and stuff for them, but yeah, for now, it’s just something cool I want to keep doing and see where it goes.

What was it like making WWPMD and what was your message to your listeners?

All right, so with this album, honestly what I’m trying to convey is kind of an arrival, I guess because I put a album out last year, but this was before I had a base. Now I have people who have been kind of on my ass for two months, when is this album coming out because I put out a mix-tape in June. And I guess, I said a line on there something about an album coming in July something like that, it was it was a freestyle, so whatever. But people really took that shit serious. So since July up until now, it’s people hitting me every week, “Yo, when is this coming out? You playing.” So it’s one of those things where I just kind of want to establish an arrival now that I have somewhat of a base and some of the more known people in my area, know who I am, this will be the first album that they really get to listen to and in real-time and hear some of the growth from me as an MC. And then I mean, again, I’m competitive person so I want to show people that I can rap my ass off.

That’s why I’m trying to put this all together and all that for sure, but I rap. So my goal is definitely for people to take that away when they listen to it. And it’s also about my shift and my train of thought, I guess. Because while I am a rapper and I love rapping, I’m thinking a lot more about the business side of things, and how to grow myself, marketing-wise, and everything like that. So I’m touching on some of those topics as well. Which is why I chose the title What Would Percy Miller Do? just because, if any other rapper in the history of the world, knew how to branch out and do other stuff it’s Master P, he sold everything.